In the previous post, we argued that the ability to read and interpret data model diagrams is an important skill for user interface designers working on business information systems or other applications that involve a lot of structured data. In this post, we will take a very brief look at UML class diagrams, a popular way to visually depict a data model. (UML is the Unified Modelling Language, a standard for visual software modelling.)

In a UML class diagram, we can represent entities (classes), attributes, operations, and various types of relationships between entities. Let’s understand these by examining the following simplistic UML class diagram showing part of the data model for a banking application: 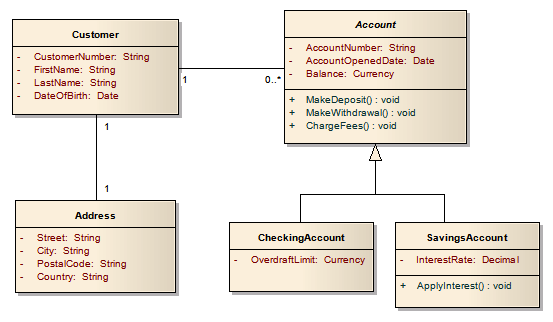 The boxes represent the various entities that the product needs to know about. (When we are talking about things in the domain, we usually use the term entities, but when these entities are implemented in software, they are more frequently called classes. We’ll use the term entities here for clarity.)

An entity is an definition of what information is needed to represent a thing or a concept, or a set of similar things or concepts. Entities basically represent nouns.

In our example diagram above, the Customer class represents all of the pieces of information, or attributes, that our application needs to know about customers: their customer numbers, their first and last names, and their dates of birth. For each entity, there will usually be many concrete instances of that entity (also known as instantiations, records, or objects) known by the system, and each instance will have its own separate set of values for each attribute.

In UML class diagrams, the box for an entity is divided into multiple sections:

Relationships between entity classes are represented with lines drawn between boxes. The UML standard uses various styles and combinations of lines and arrows to indicate different types of relationships. Let’s examine the two most common relationship types: associations and inheritance.

The numbers alongside the relationship lines indicate what is called the cardinality of the relationship. In the sample diagram, the association between Customer and Address is what is called a 1-to-1 relationship, and this means that every Customer instance must be linked to exactly one Address instance. In other words, a Customer cannot have more than one address, nor can a Customer exist who doesn’t have an address on file; every Customer instance must always be linked to an Address instance. And likewise, an Address instance cannot exist in the system if it is not linked to a Customer, and an Address instance can only be linked with one specific Customer. This particular model diagram doesn’t allow two customers (a husband and wife, for instance) who happen to live at the same postal address to share one Address record in the system; each Customer must have its own Address, which means there would be data duplication (two Address records holding the same postal address data) — which may have usability consequences.

The association between Customer and Account, on the other hand, is an example of what is generally called a 1-to-many relationship. There is a cardinality indicator of 1 on the one side, and the other side, the 0..* notation is shorthand for “zero or many”.

But the 1 on the other end of the association means that an Account can only belong to one Customer; two Customers cannot share an Account (at least according to this data model).

Another type of relationship is the inheritance relationship, drawn with a plain line with an open triangular arrowhead at one end.

In our banking example above, there is an entity called Account, and below it, there are two entities, CheckingAccount and SavingsAccount, which are specialized types (subclasses) of Account.

But a Customer will never actually be linked to an instance of Account. Why? Account is what we call an abstract supertype — no instances of that type can actually be created in the system. You can only create one of the subtypes. So if a customer wants to open a new account, he or she must choose between a CheckingAccount and a SavingsAccount, as no “general” Account can be created.

If you look closely, you will see in the diagram that the entity name “Account” is italicized. This italicization is the convention used in UML for marking an entity as being an abstract entity. Because this is so subtle visually, so you can additionally add the notation “<<abstract>>” inside the top compartment of the box if you want to bring more attention to the fact.

So why are data models so important in many projects?

Likewise, the relationships between the entities are important for user interface designers to know, because these associations reveal how all of the data is related, and your application’s interface cannot be designed in such a way that it violates the relationships in the model. So if the data model allows customers to have multiple accounts, then you need to design the product to allow the user a way to view and access all of the accounts. This means that the product will look and behave differently than it would if customers were only permitted to have a single account.

Changing a data model to better fit the real world

You might say that some of the rules we’ve just discussed above for customers and addresses and accounts are not very practical for a real bank — two spouses should be able to share a joint account, for instance. And that’s correct — this is a highly oversimplified data model.

If you’re working with a data model that has been designed by somebody else, it’s often inevitable that you come to some disagreement over how the entities and relationships have been designed. In our bank example, you might argue that customers should be able to have multiple addresses on file, such as a work address as well as a home address. Or you might want the system to keep track of all of the address changes in the past. Or you might want address records to be shared by multiple customers in the same household, so that a change-of-address need only be done once, and the new address becomes effective for all of the customers sharing the address record.

If the design of a data model is hindering your ability to design a usable interface, because the designer’s data model doesn’t quite match the way your users want or expect things to be, then you should propose changes to the data model and discuss them in with your project team. Developers and project managers can be resistant to changing the data model because some types of changes can involve a lot of work, expense, and uncertainty.

Keep in mind that changing the data model early on in a project is much easier than making changes once the software has been built and is being used by users — there can be some very tricky data conversion and migration issues to consider.

Usability concerns in moving from a data model to screen designs

There is often a temptation to map one-to-one from data models to screen designs in a mechanical fashion, and in fact some systems exist that can translate data models or database schemas into rudimentary user interfaces. The use of entities often lends itself to having separate screens or tabs or other sections that correspond to various entities, but beware that this is not always desirable from a usability perspective. Sometimes there may be fields that logically belong near each other on the screen, but the fields may be stored in attributes in different entities in the model. And mimicking the data model too closely can often force the user to have to create the right instances of the right entities in the right places in order to get tasks done, which is a very poor approach from a usability perspective; this would essentially force the user to know all the details of the data model without having access to a copy of the data model diagram!

Focus on the users’ needs first. Use the data model to inform yourself of what entities and attributes are available, but then design the screens in a way that makes logical sense. Think about the work and tasks that the users have to do, and design task flows that guide them through the work with a minimum of memorization. Focus on designing a user-friendly experience first, and then worry about defining the mappings between the on-screen elements and the data model.

While this brief introduction to UML class diagrams only scratches the surface, it will hopefully get you started if you’re a user interface designer who hasn’t encountered data models before and now needs to be able to read and interpret them in a project. If you want to learn more about UML, a web search will uncover plenty of useful resources.